I’ve spent a lot of my time in schools over the last few weeks, talking to teachers, administrators, students and parents about what they are learning.  This is the most joyful part of my job; listening to people talk with enthusiasm about what or how they are learning.

Here are a few highlights:

– I worked with some Kindergarten students who were learning to measure using non-standard units.  I was amazed at their open-ness to learning and the amazing possibilities they saw.  One four year old told me with pride “I am four and I’m already taller than Addison.”  ” I think you are 11″ he then said to me.  “11 what?”  I asked.  “11 measures” he said.

-I co-hosted an Early Years Adobe Meet-Up with 19 schools across our board and some Community Partners.  The meet-up gave time and space for our Early Years teams to consider play and inquiry in the learning lives of our children and to think and imagine what might be next for our students and for us.  Our Early Years teams eagerly made their thinking visible by typing into chat pods which we have now shared out for folks to use as a basis for “next conversations.”

– I facilitated two District Support Visits where the pre- meeting with the leadership teams was one of the highlights of the day.  I am amazed at the “culture of learning” throughout our schools and system.  In one meeting people were so honest and vulnerable about what they still need or want to learn about the content of math.  I was so proud of their bravery for telling their colleagues what they still want and crave to learn.

-I took part in our board’s Ministry Board Improvement Monitoring meeting where I was able to describe the fine learning taking part across our system on behalf of our students.  We talked about math but more importantly, we talked about the collaborative culture of learning where we “learn in teams together” and capacity build across the system daily.

-I am amazed daily by the learning happening at #TLDSBlearns.  The learning that teachers, principals, vice principals, DECEs, classrooms and students are doing publically on Twitter makes me so proud.  We are sharing our questions, our provocations, our wonderings and our delight in our students and our own learning.  If you haven’t already, please check out Ridgewood’s Junior Classrooms who are posing questions to other classrooms around patterning and data management and they are getting responses from all around the world.  You can find them on Twitter:  @Team202_RPS and @Team224_RPS.  Awesome public learning.

ck wants to know what your favorite season is fill out and send back #tldsblearns https://t.co/dahiWCcV3n

On this eve of American Thanksgving,  I want to say thank-you to everyone for inviting me into the learning.  Within our board I am privileged to sit with such passionate educators and leaders  who let me listen, ask questions, talk to students and just enjoy the learning.  I am also so lucky to be able to learn with folks at a provincial level who provoke my thinking, ask me questions and recognize the fine work happening in TLDSB.

I am one happy and thankful learner.

Nothing can bring me to tears like a Remembrance Day ceremony in a school.  Students so solemnly welcoming veterans into their gymnasium and learning spaces.  The students are so respecful and in awe of our veterans who are so proud to be sharing the day with our students.

About 5 years ago, a group of students from Pine Glen, with teacher Jeninfer Clark, told a story of WW1,  the story of the Christmas Truce. Done in tableu style, the haunting music and the story the students brought to life left not a dry eye in the house.

Here is John McDermott’s version…almost as good as the grade 6’s at Pine Glen from a few years ago.

I first began my System Leadership Journey as the District Principal of Elementary School Improvement in 2008.  At the time, I worked with a Superintendent named Gale Sherin who was close to retirement.  Gale taught me many things about the system and about curriculum.  But I learned about relationships from her dog, Clancey.

As Gale was getting ready to retire from our district, she mentioned that the last thing she needed to do was find a home for her dog because he was getting older and didn’t love car rides.  She knew he wouldn’t make the trip to Florida two times per year that she and her husband were playing on making during thier retirement.

So, our family stepped in.  We had said good-bye to our Zinnia, a free fruit stand dog (that’s another story) earlier in the year and had just started talking about finding a new family dog.  Well, once I heard Clancey’s story I was gone.

Clancey was born on October 16 2002.  He went to his first family in  December of  2002.  This family lived in the home that Gale and her husband eventually bought.  He lived with his first family until they decided to leave their home on the lake.  In stepped Gale to buy this lake house.  Part of the deal was that the dog of the house, Clancey would come along with the house.  Kind of like a package deal.  Gale and her husband lived in the home with Clancey for many years.  I know that Gale’s neighbour and children had a warm spot in their heart for Clancey, who they had known now through two owners, and regularly walked him and played with him.  Clancey had good people in his life.

When Gale chose to retire, our family stepped in.  We visited Clancey in his home, tried him out for a day in our home and then took the plunge to have him become ours.  I remember Gale telling me a few things about Clancey before he became ours for keeps:

Clancey has now been since November of 2008.  We have become his forever family.  He has taught us so much about loyalty and loving the people who are good to you, who feed you, who love you, who throw a stick your way.  From day 1 Clancey was willing to get to know our 3 cats, Hunter, Charlie and Ned Schneebly.  They have become friends and there are days that we arrive home from our learning journies to find the 4 of them all laying on the same blanket or carpet.  And since day 1 Clancey has been Tom, my husband’s loyal companion.  If Tom is  in the room, Clancey’s eyes are on him.   They are loyal companions to each other.

So what is the definition of loyalty:

I can truly say that Clancey has taught us about loyalty.  About feeling supported and having a strong allegiance to someone.  Even though we weren’t his first family, he is our most loved dog.  He may be getting older (he just turned 12 last month) but he still loves to fetch sticks, go for a swim at the Port Sydney dam, tear apart his “babies” and walk on our trails.

He has taught us a lot about relationships, loyalty and being a family.  I am so thankful that he came into our lives. 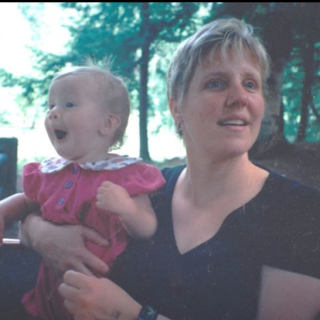 I am the Lead Learner and Superintendent of Learning with the Trillium Lakelands District School Board in Central Ontario. I am mom to Alexis, partner to Tom and an avid reader. I am interested in Connected Learning, YA Literature, Leadership and Change Theory.